I must admit I was anxious to attend this festival when I heard the lineup featured none other than Shuggie Otis. I have had this compelling urge to see Shuggie rip through the guitar riff in Strawberry Letter #23 for some time now and while he played a shortened version of the tune he did feature the riff and killed it.

The Nines Festival was advertised as a multi-arts, multi-stage festival held 35 miles west of Boston on Willard Field in Devens that featured a diverse lineup of amazing musicians, comedians, and showcased the works of visual artists. The festival grounds were set up beautifully with a massive main stage, smaller second stage, a full blown Comedy tent and various pieces of artwork dispersed throughout the grounds. The centerpiece of the festival was the world's longest playable xylophone that kept people playing throughout the entire day. Also included in the setup were an assortment of tents displaying various artists work for sale.

First up on the main stage were what I thought to be the surprise of the day. Walter Sickert & The Army Of Broken Toys, an eclectic group if I've ever seen one, fronted by the colorful Sickert dressed up in his finest regalia, he reminded me of Dr. John in his "Night Tripper" phase. The band has been called everything from "theatrical misfits" to "an exceptionally motley crew" and they wear it like a badge of honor. They hit the stage and being the first band on a lot of people that showed up late missed them. While the crowd was small at that time they grabbed everyone's attention and brought us all along for the ride.

Boston's Air Traffic Controller took to the smaller stage and delivered a rousing set of rootsy pop. Props go out to the festival organizers for keeping to a tight schedule, there was always live music on stage during the entire show.

Shuggie Otis was next up delivering a tasty set of rarities from his album Inspiration Information that is now part of a two album release containing newer material and the entire 1974 release. Shuggie seemed at ease with the crowd and his new band featuring two brothers Jon and Nick on percussion and drums as well as his cousin Swang Stewart on keys and killer horn section as well. Shuggie had just finished Strawberry Letter #23 and was going to start another song when, due to the tight schedule had to stop.

Matt Pond, who has been recording and touring for years as Matt Pond PA pulled off a great set of catchy pop songs and kept the crowd into it as well as great sets by Walk Off The Earth, Dr. Dog, Delta Spirit (fresh from the studio) and the closers Explosions In The Sky. Overall the festival was a success in my eyes and hopefully another is in the planning stages for next year. As I said earlier the layout was well thought out, only changes I would make would be to add another day, offer camping as well as longer sets for the bands that can support it. 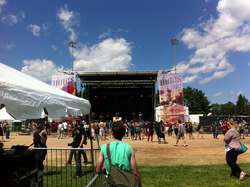 Main Stage at the Nines Festival 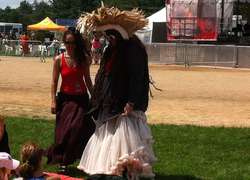 Walter Sickert from the Army Of Broken Toys 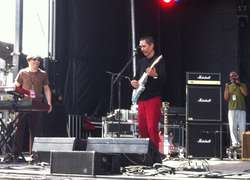 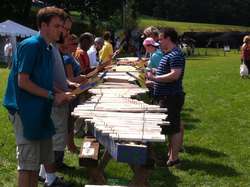