Atwood's has a rich history of showcasing a mix of diverse artists that have stood the test of time and Peter Case is just another fine example. This particular show on a Saturday afternoon was a treat for me being a lifelong fan of Peter's songwriting and playing. A three time Grammy nominee Case has a resume' that most musicians would die for. The first time I had heard of him was while he was in the punk band The Nerves. Their 1976 EP contained a tune called "Hanging On The Telephone" which had little impact when they released it until it was recorded by Blondie in 1978 on Parallel Lines which resulted in a smash hit for them and a bit of notoriety for Case. After the breakup of The Nerves in 1978 he went on and formed the band The Plimsouls in 1979. The Plimsouls had several tunes hit the charts from their first release like "A Million Miles Away" and "Oldest Story In The World". As a result of their popularity in California they were signed to appear in the film Valley Girls as the prom band. The band enjoyed cult status for a while which hit its peak after they broke up.

Peter has since enjoyed a solo career staying mostly within the Americana/Roots music genre and has released thirteen solo recordings. Case began to write his memoir (As Far As You Can Get Without A Passport - everthemore books 2007) covering his growing up in upstate New York in the early seventies and feeling the urge to grow as a musician. This led him on his journey across the United States searching for a place that would accept him and his sound. During that time the mantra in the music business was to get to California where he could hone his craft.

During the show Case covered songs from his newest release Hwy 62 which is full of musings derived from his daily life, like "Pelican Bay" which tells the story of a supermax prison located in the town that he lives in and the impact it has on both the residents of the town and the 3000+ prisoners locked up inside. Another gem he performed during the show was "All Dressed Up (For Trial)" a humorous take on getting arrested and having to go to court in a borrowed suit and tie. Other songs performed during the show were "Water From A Stone", "If I Go Crazy" along with his take on Dylan's "Long Time Gone". This being a solo show Peter filled in between songs with stories from his life from the early days as a sixteen year old living in upstate New York in a 6 bedroom house filled with 24 "roommates" to stories of living in San Francisco busking for enough money to eat that day, sleeping in abandoned cars at the junkyard and traveling up and down the Cali coast. Peter seems to have never given up on that rambling lifestyle, still busking albeit inside clubs rather than on the street, telling stories and writing music, detailing his discoveries. In a brief chat I had with Peter after the show he mentioned that he will be continuing to write his memoirs, something I hope he does because after reading his brief earlier release, the man has lived a life filled with music and some great stories, this will be interesting. 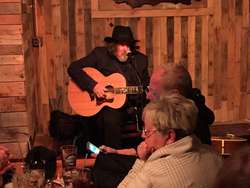 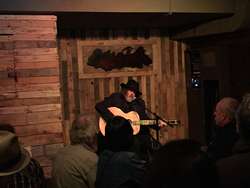