This is Hip Hop Festival

Featuring a nostalgic ‘90s focused line-up with all protagonists having had a substantial impact on all facets of American hip-hop culture throughout the years, the Australian mini-festival “This is Hip Hop” offered the opportunity to witness Queensbridge’s infamous Mobb Deep, West Coast stalwart DJ Quik, and Cleveland’s Bone, Thugs & Harmony, the latter of which were to perform their seminal album E. 1999 Eternal in its entirety.

DJ Quik set the tone of the evening, which turned out to be more of a celebratory, intimate bloc-party one than what the sterile environment of the airport hangar like Hordern Pavilion usually provides. Originally constructed to meet the increasing demands for exhibition space at Sydney’s Royal Easter Show, the Hordern is basically a big hall.

Quik’s Greatest Hits: Live at the House of Blues album is testament to the qualities of his live performances and his ability to fill even the most soulless of venues with a soulful vibe: West Coast shows with his well-oiled backing band have become a fixture in recent years and it is not uncommon for his shows to culminate in funk and soul jam sessions featuring celebrity guests.

Halfway across the world he was backed by his DJ in a more stripped down incarnation, which still proved to be enough of a funkafied backup. With soulful hooks aplenty and at times jazz-fusion grooves, DJ Quik’s songwriting skills manage to make one momentarily forget the formula most rap songs are structured in.

Australian hip-hop festivals with US acts have a history of cancellations, downgrades and immigration issues, with this one not being an exception: Lady of Rage dropping off the bill last minute and only 50% of the infamous Mobb Deep materialized on terra australis: With Prodigy not having made it Down Under due to doctor’s orders and his well publicized illness, his partner is crime Havoc had to hold the fort and shoulder all vocal performance duties.

Needless to say that with Prodigy’s absence and the fact that much of the appeal lies in the back and forth and the natural chemistry between the two protagonists from Queens’ concrete jungle, the performance left a bit to be desired. Havoc rose to the occasion thought and soldiered through the classics, proving that it is nearly impossible to deliver a bad show when one can cherry pick from a treasured back catalogue like that of Mobb Deep.

Transcending hip-hop generations, especially cuts from their classic The Infamous album upped the nod factor amongst the crowd across a raw, short and brutally to the point set. E. 1999 Eternal, the title an homage both the street corner frequented by BT-n-H as well as their mentor Easy E, is a milestone in the G-Funk meet East Coast genre, dominated by a consistent menacing and somber tone due to its lyricism being firmly rooted in gloomy territory, the sense of tunefulness was never lost as it was framed by smoked-out, groovy and melodic synth ornaments.

The album set a benchmark in terms of mixing the rhyme-style, cadence and familiar themes of the gangster genre with seemingly incongruent singjay harmonizing, goth-style melodic flows and street corner crooning.

While the record presented itself in a laid-back and ethereal manner,

Bone, Thugs-N-Harmony’s live rendition is more of an upbeat affair with their trademark soulful delivery style of intertwining, engaging rapid-fire rhymes teamwork, with each member contributing his unique style to a coherent whole with an exceptional tonal range.

While some might prefer the mystic clouds of nostalgia contained within recordings to the real thing, an enjoyable evening was concluded with Bones’ charismatic and vocally impressive performance that showed that both their album as well as their ability to command a crowd stood the test of time. 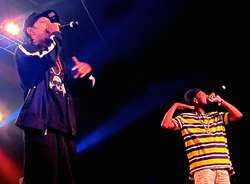 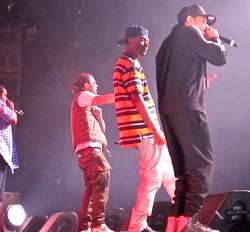 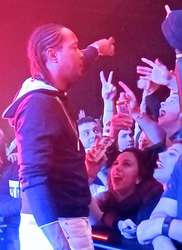 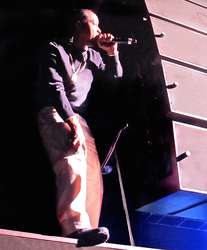 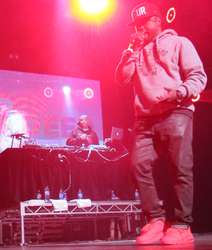 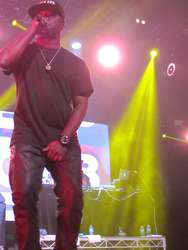