Blogpost: Ministry Show No Signs Of Stopping In Denver

With the passing of Lemmy Kilminster, Al Jorgensen has become the last man standing in regards to what amount of excess the human body can endure. And when Ministry rolled into town on Sunday, Uncle Al made it clear that he’s not ready to pack it in yet.  With a sly grin and an assumed twinkle in his eye behind those ubiquitous sunglasses, the band tore through an all-too-brief and interestingly selected set. Ministry has had a long and storied history throughout the years with some ups and downs in their recorded legacy. But since the departure of original members Paul Barker and Bill Rieflin, one would think the real task over the years would be to find musicians capable of bring these songs to the stage. in this instance, Jorgensen has assembled a smaller group (by Ministry standards) of folks up to the task, beginning with guitarist Sin Quirin who, bookended with guitarist Cesar Soto provided all the speed, precision and aggression needed to hammer home their point. Ever the rapscalion, Jorgensen flanked the band on either side of the stage with two enormous inflatable chickens with the all too prevalent nazi-punks-fuck-off symbol and on top of their heads, the just as familiar coif of a current sitting president. Opening with Let’s Go from the band’s 2007 album The Last Sucker, the 1st half of the set was comprised of latter-day Ministry, from albums like Rio Grande Blood and Dark Side of the Spoon - also including two songs from their upcoming album Amerikkkant - Wargasm and Antifa, one of the highlights of the set, with balaclava-clad protesters marching behind. Never a band to shy away from making political statements, the screen images projected made their stance on the current administration crystal clear, which can be a downer for some folks in these divisive times, but with Ol’ Uncle Al stalking the stage with a genuine affection toward the crowd like a less-hunched Ozzy Ozbourne, it becomes a party. Punch In The Face 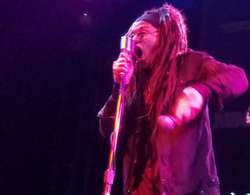 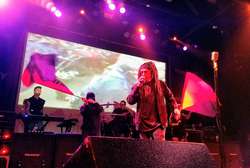