Blogpost: The Pixies Bring The Cool back to Denver Black Francis is a man of few words. This would be detrimental as a stockbroker, but as the frontman for one of the most seminal bands of the 90s it comes in handy when you’re trying to squeeze a seemingly limitless musical career into a single show and not go past curfew. They almost did it, with the house lights coming on towards the tail end of the set. Interesting to see both the crowd and band bathed in house lights but come on, Fillmore - that's just rude as shit.

As an old, old man, I feel no small degree of shame that this was my first time seeing The Pixies live. And now, having scratched the name off an extensive band bucket list, i must ask myself - “what the fuck took you so long?”

The energy and anticipation was palpable before the lights went down over the crowd of mostly over 30s. And as soon as Francis, Joey Santiago, David Lovering and Paz Lenchantin sauntered out, and began playing, the emotions broke under the wave of adoration (no word play intended) emanating from the crowd. What becomes evident as the band played on is how well this band knows their audience and, more importantly, how much they trust their audience. The significance of The Pixies’ legacy came through with every chord played, whether it was Nimrod’s Son off their 1987 debut, or Bel Esprit off their latest 2016 release. Essential becomes the secret word of the evening. And although they are far from “tight” in the parlance, there’s an endearing freedom and looseness in the way they play that even when bordering on dischordant, never looses its power. 2016’s Head Carrier was the first album to feature bassist and vocalist Paz Lenchantin, whose previous resume speaks for itself and in a live setting, to even mention any former members of the band would be a disservice as she played and executed her role with such ease and aplomb, it was like she’d been there since the band’s inception.

But, like so many bands, a leader must be appointed to make sure the trains run on time, and Black Francis is that leader. Not working off a setlist, it would appear that the set is wholly dictated by Francis, who works off no printed list, but has a separate mic to communicate with the band, telling them the next song as soon as the previous song is finished. It’s a real testament to the skills of the band as a whole to be able to access that information and play with as many seconds as it takes for Lovering to count them down.

If you haven't seen The Pixies live yet, don’t be a fool like I was. Learn from my mistakes. The band starts the next leg of the tour November 29 in Portand, OR so you still have time to get tickets. Tickets also make excellent early gifts for Thanksgiving, Christmas, Hannukah and Kwanzaa. 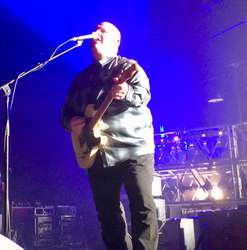 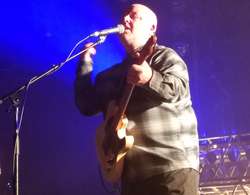